World equity prices trended mostly higher during the first half of November, led by US markets. At the mid-point of the fourth quarter, gains since the end of September are strong for most broad based global indexes despite political uncertainty in Europe and at home.

Several widely followed US benchmarks have posted new all-time highs over the past two weeks, building on October’s strong finish. However, the Dow Utility and Transportation Averages, the Russell 2000 and Russell 2000 Value, have yet to better their comparable peaks. The broadest measures of US equity performance, on the other hand, have moved into new high territory. Price changes of representative benchmarks for the fourth quarter to date (QTD) and 2019 YTD are listed below.

The inconsistent result in the above table is the FTSE All-Share index, which has posted a modest QTD decline. Britain is immersed in a short, intense election campaign as voters prepare to cast ballots on December 14. A recent national poll, conducted from November 15-18, finds Conservative party support at 42% with the Labour party at 32%. Both numbers have risen since previous polls with Conservative gains outpacing Labour’s.1

An important election related development is a pledge by The Brexit Party that it will not stand candidates against existing Conservative seat holders. Mr. Nigel Farage, leader of The Brexit Party, linked this decision to a shift in the PM’s positions on Brexit.2 All Conservative candidates running have pledged to support Mr. Johnson’s Brexit deal.3 The upcoming election, then, will be the de facto second referendum long sought by Remainers.

Third quarter earnings reports in the US continue to beat analysts’ estimates. As of November 8, 89% of S&P 500 companies have reported with 75% posting positive earnings surprises and 60% bettering revenue expectations.4 Corporate guidance for fourth quarter results is generally consistent with recent trends. Profits and revenues for 2019 compared to 2018 reports have grown on average about 2.4% below the 2017-2018 annual rates. Forecasts for the fourth quarter, so far, project a similar trend.

Additionally, companies that have surpassed earnings and revenue predictions have seen their share prices rise more than historical averages as a result while reports that contain negative surprises have been less harshly punished, again compared to historical norms.5

One factor that may be buttressing US equity markets is that forecasts for Q1 and Q2 2020 earnings are calling for greater year to year increases in growth rates compared to 2018-2019. This could suggest that trade-related uncertainty blamed for a slowdown in capital investment and slower earnings growth this year, may be waning.

Other possible concurrent influences are that retail demand from consumers remains strong, labor markets tight and overall economic expansion robust. It is also conceivable that a favorable trade agreement with China could amplify the expected growth rate of corporate profits here and abroad in 2020. The chart below illustrates the S&P 500’s price performance compared to forward (future) 12 month’s projected earnings per share. 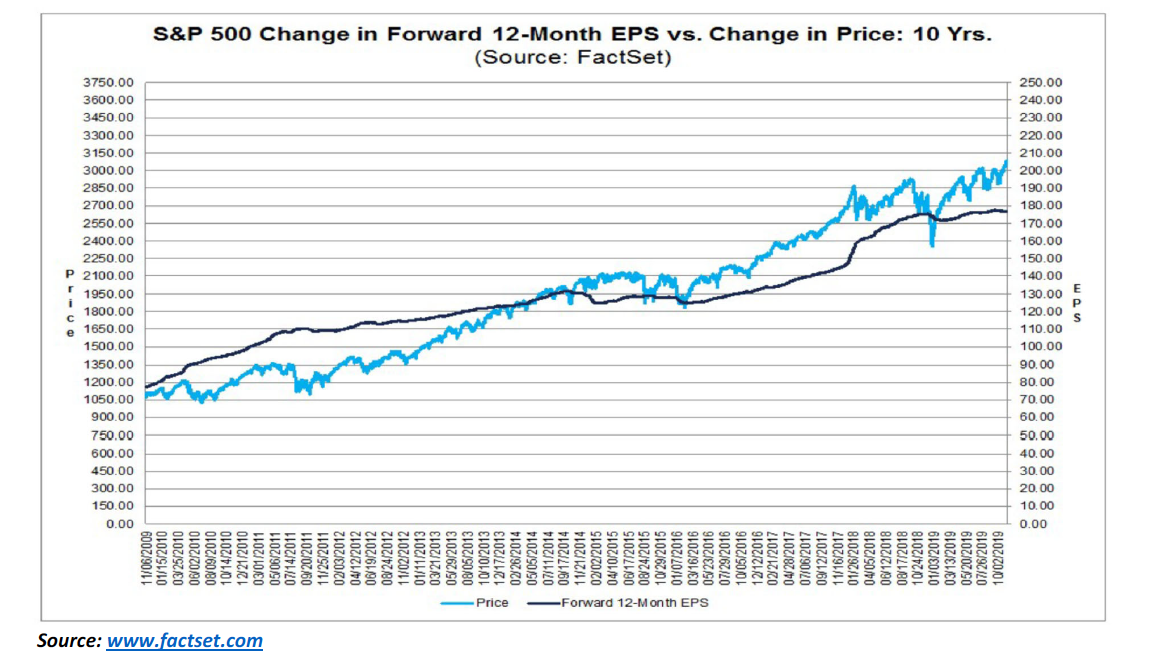 US credit markets have been relatively calm since the Federal Reserve’s latest interest rate cut was announced late last month. The most recent reports on inflation rates both at the consumer and producer price levels are consistent with short term rates that are currently nominally above 1.5%.

After a 0.4% increase by the CPI in October, the year to year rise is a comfortable 1.8%.6 Similarly, the PPI rose 0.4% in October and is up 1.1% for the year since October 2018.7 Neither these statistics nor the underlying product and industry specific reports contain information that suggests inflation is expected to accelerate from current levels. This conclusion is supported by low volatility and price stability in the bond market.

In the US, it is virtually impossible to avoid news on the House Intelligence Committee’s impeachment inquiry. Last week featured the first open sessions, which will be followed this week by three days of hearings and testimony from eight additional witnesses. To date, Democrats see damning evidence against the President in transcripts and testimony while Republicans see the exact opposite.

The equity and bond markets’ verdicts are much less confusing than the political spin from both sides that is consuming Washington. New all-time highs for broad based equity benchmarks and calm in the credit markets are loud statements that, ultimately, the President’s removal from office is not expected. However, the Democrats’ House majority, rules of the inquiry, leaks from closed door testimony and the tenor of public comments strongly suggest that Articles of Impeachment are likely to be delivered to the Senate.

Conviction in the Senate remains a remote possibility considering statements from Senators who have publicly expressed opinions. Republicans in both houses of Congress appear united in their defense of the President, but isolated Democrats have voiced concern that the public is becoming impatient with a lack of progress on national issues such as immigration, healthcare costs and a needed increase in the debt ceiling. The inquiry is expected to continue through the upcoming Thanksgiving recess and perhaps beyond.

Domestic equity markets are providing ample evidence that corporate earnings, economic conditions and expectations for the future are the main drivers of prices and that, to a certain extent, their performance is independent of current political tensions. As the end of a strongly positive year of returns approaches, investors appear to be looking beyond the current pause in earnings growth, at least for the time being.

Concrete progress resolving trade disputes with China remains just out of reach and any negative news from the negotiations will likely negatively impact prices as would an unexpected turn in the impeachment inquiry. Patient, focused investors have been rewarded despite the swirl of news throughout 2019. Once the impeachment furor passes into history, we expect renewed focus on the economy’s future.

This content is developed from sources believed to be providing accurate information. The opinions expressed and material provided are for informational and/or educational purposes only and is not, in any way, to be considered investment advice nor a recommendation of any investment product. Advice may only be provided by DWM's advisory persons after entering into an advisory agreement and provided DWM with all requested background and account information.